Our congregation is part of the The Episcopal Church and the worldwide Anglican Communion. We worship out of the Book of Common Prayer and celebrate the Eucharist every Sunday. We welcome people of any marital status, sexual orientation, race, age, ability, or political leaning.  We ordain women as clergy and perform same-sex marriages. For people coming from the Roman Catholic church the sacramental nature of our worship will be familiar. For people coming from a Protestant church our use of scripture and our hymns will feel familiar. Whether you come from a different faith tradition or no faith tradition, at the Episcopal Church we hope you find the opportunity to know God in beautiful surroundings through scripture, song and prayer. We welcome you to join us in the exploration of what the Holy Spirit is up to in our lives and in our community.

We work to become disciples by
Our vestry leaders supporting our work to become disciples are:
Sue Roman, Warden
Dorothy Schmidt, Secretary
Cindy Anderau, Liaison to Parish Life: Strengthening our unity as a community who cares for and loves one another.
Cathy Filiato, Liaison to Formation: Drawing from scripture, tradition, and our own stories to become more faithful followers of Jesus.

We work to act as apostles by
Our vestry leaders supporting our work to act as apostles are:
Forry Weatherby, Warden
Noel Bellesheim, Treasurer
Patrick DeBrock, Liaison to Finance: Guiding and giving our gifts of time, talent, and treasure.
Gordon Dunn, Liaison to Properties: Connecting our buildings and grounds with our mission to serve others.
Tom Swetts, Delegate to Convention and the Southwest Region

Read the minutes of Vestry meetings.

The Rev. Andrea Castner Wyatt - Rector
The Reverend Andrea Castner Wyatt was ordained in 2015 to the Priesthood in the Diocese of Massachusetts, where she served as Assistant Rector at Grace Episcopal Church in the historic whaling village of New Bedford, Massachusetts.  Andrea was first ordained in 2001 in the United Church of Christ and served as a pastor and educator in Congregational churches in Framingham, Holliston, and Lexington Massachusetts.  Andrea’s pastoral experience also includes clinical chaplaincy in hospice and leadership in Episcopal missional ministries.

It was at the experimental community ‘The Crossing’ at St. Paul’s Cathedral in Boston that Andrea first fell in love with the Episcopal Church in 2007.  She discovered spirit-filled, passionate people praying and experimenting for the future of Christ’s church.  Rev. Andrea came to us from St. David’s on-the-Hill Episcopal Church in Cranston, Rhode Island where she led that parish in re-development ministry as an ‘Incubator for Mission.’

She married Chuck Wyatt, a fellow Harvard Divinity School graduate, in 1991.  Chuck is Manager of Web Technical Services at Clark University in Worcester, Massachusetts.  They are blessed with 2 daughters.  Molly teaches 4th Grade in urban Worcester, MA, and Emma is studying Speech and Language Pathology at Massachusetts General Hospital. Andrea and Chuck have a Puggle named Sadie and a cat named Bean.  They love cycling, chasing ancient Celtic saints in the Atlantic Isles, and are learning how to sail. 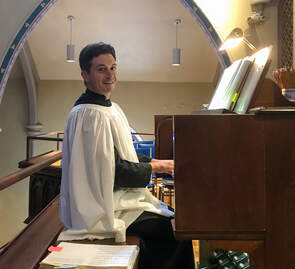 Donald Wismann - Director of Music Ministry
Don is a native of New Jersey and studied organ and voice at Kean University, New Jersey. He has been involved in liturgical music for many years, most recently serving the Parish of St. Anthony in Prospect, CT.

Kim Merrill - Communications and Membership Manager
Kim lives in Danbury with her husband and three teenagers.  With a background in Marketing and Public Relations, Kim is responsible for all communications, both internal and external, as well as maintaining our membership database. Prior positions include Director of PR at Immanuel Lutheran Church & School, Communications Manager for Physician One Urgent Care and PR assistant at Ethan Allen Headquarters. ​​

Lori Rohrbacher - Bookkeeper
Lori and her husband Frank have been living in Newtown since 1993. They have two grown children.  Lori has a BS in Accounting from the University of Scranton. Before becoming a bookkeeping and finance consultant to various various clients she was the Director, Planning and Support Services at Oxford Health Plans, Inc.  Lori is in the office on Wednesdays and Fridays.  If you need to connect with her, the best way is email her to schedule an appointment.

Jack Qubick - Sexton
Jack has been a pillar of Newtown for many many years.  As a prior police officer of the town, he is recognized by many who have fond memories of Jack being "a great, and fair cop that we all enjoyed seeing."  As an employee of Trinity for close to 20 years, Jack is an expert on all that goes on in our church building.

Church and Parish House
The present Trinity Church, completed in 1870, is the fourth building the parish has occupied since 1732. It was preceded by a wooden structure that stood just north of it. For a brief time, the old and new buildings were side by side; then the old church was dismantled and sold for $100. With it gone, the town was able to straighten the top of Church Hill Road.  The building underwent major renovations in 1960 when the parish house was added, and again in the year 2000.  If you look closely at our interior walls, you can still find the original building, intact.

The parish house includes the Glover Community Room, used for parish and community gatherings, a full-service kitchen, staff offices, and classroom space, which is shared with Trinity Day School. It is available for community use and is currently used by two Girl Scout troops, Alcoholics Anonymous, Charley's Angels, Connecticut Choral Society, Newtown Interfaith Council, Interfaith Partners for Refugee Resettlement and the Waterbury Symphony. To arrange to use the facilities please call the office at 203-426-9070.
Memorial Garden
The Trinity Memorial Garden is a place for prayer, meditation, and final rest for the cremains of the departed. It is a lovely spot that provides an outdoor worship space in the summer. Cremains are interred by burial in the enclosure’s lawn; above-ground markers are not used. If you are interested in arranging a place in the Memorial Garden for yourself or a loved one, call the office at 203-426-9070 for information.
Labyrinth
Our permanent outdoor labyrinth was built in 2013 as an Eagle Scout project by youth parishioner Jack Benedict, We offer the opportunity to walk the labyrinth anytime, as one element in our larger effort to encourage people to experience the rich depths of spirituality in Christianity. The labyrinth is a combination of walking and prayer, with roots in ancient history. These "paths for prayer" have been part of Christian prayer and pilgrimage since the middle ages. Walking the labyrinth clears the mind and gives us insight into our spiritual journeys. Each walk into and out of the labyrinth is a unique opportunity to meet our creative, loving God through contemplative prayer.
Rectory and Curate House
The parish rectory was part of a bequest made by S. Curtis Glover in 1960. The four-bedroom Victorian-era home, built in 1890, sits at the top of Main Street, just one block from the church. In 1985 a three-bedroom curate house was constructed behind the rectory, and has provided a home for our curates, associate rectors and their families.

​A Brief History of Trinity

Trinity Church was founded in 1732 when Newtown’s Congregational minister, the Reverend John Beach converted to the Anglican Church, causing considerable turmoil in the town.  He sailed to Scotland where he was ordained by an Anglican Bishop and upon his return, conducted his first service as rector of what was to become Trinity parish.

In the next 100 years, Trinity grew to be the largest parish in the diocese with 300 communicants. It grew physically as well, moving to three different sites in the heart of Newtown.

Trinity continued to expand both physically and spiritually during the 20th century. The parish house was added, as well as the parking lot. Trinity developed a significant outreach program which gave funds for the construction of a parish house for St. Luke’s, New Haven, participated in creating Amos House, a transitional living facility for the homeless, helped establish the Family Counseling Center in Newtown and the Newtown Youth Services, a town-designated youth service bureau.  Trinity also became a covenant church with Housatonic Habitat for Humanity, an affiliate of the international organization dedicated to building homes for low income families. In addition, Trinity prepared for and adopted the new Book of Common Prayer, and remodeled the sanctuary to incorporate a free-standing altar, underscoring the fact that the Eucharist had become the focus of our worship, and the congregation was given back their significant role in worship.

In 2000 the parish accomplished a successful 1.5-million-dollar capital campaign providing major renovations throughout the church and parish house. In recent years, members of Trinity helped to establish Ben’s Lighthouse, a grassroots organization founded following the tragedy at Sandy Hook Elementary School to honor 6-year old Benjamin Wheeler, a member of Trinity.  A companion parish program with San José la Montaña in El Salvador, an active Stephen Ministry, and a commitment to the Newtown Interfaith Refugee Resettlement Program were also initiated.