A Brief History of Trinity 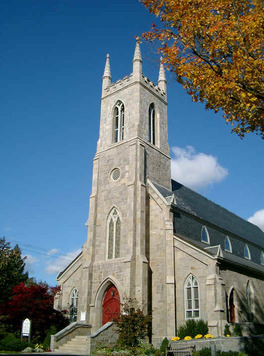 A Brief History of Trinity
Trinity has been blessed with strong lay and pastoral leadership through our long and rich history.  In our first 100 years we had only three rectors who laid a firm foundation for the parish.

In 1732 Newtown’s Congregational minister, the Reverend John Beach converted to the Anglican Church, causing considerable turmoil in the town.  He sailed to Scotland where he was ordained by an Anglican Bishop and upon his return, conducted his first service as rector of what was to become Trinity parish.
John Beach was by all accounts a giant in the early Anglican-Episcopal tradition in America.  Unpopular though it was, Beach supported the Crown throughout the American Revolution, surviving threats both to his life and ministry.  He died in 1782, the year before the Revolution ended and the year before the formal establishment of the American Episcopal Church.

When the Reverend Daniel Burhans, D.D. became rector in 1799, Trinity was the largest parish in the diocese with 300 communicants.  Trinity grew physically as well.  John Beach’s first church was a 28 foot by 24 foot structured located near the corner of Main Street and Glover Avenue.  In 1746 a larger building was built on the west side of Main Street.  Then, in 1793, Bishop Samuel Seabury consecrated a third building which served well until the present stone structure was built in 1870.
In the late 1950s, Trinity received a large testamentary trust that still provides a large part of Trinity’s annual income.  This trust enabled to parish to enlarge its buildings, increase its staff, and increase its outreach program.  In the decades following such remarkable growth, Trinity continued to build both spiritually and physically, adding the parish house and parking lot.

The 1970s found Trinity developing a significant outreach program by which it helped fund the constitution of a parish house for St. Luke’s, New Haven, an inner-city church.  Trinity was one of five area church that created Amos House, a transitional living facility for the homeless. Trinity helped found the Family Counseling Center in Newtown and the Newtown Youth Services, a town-designated youth service bureau.  Trinity also became a covenant church with Housatonic Habitat for Humanity, an affiliate of the international organization dedicated to building homes for low income families.

The Reverend Stephen Gushee guided Trinity the liturgical changes of the 1970’s.  Trial liturgies made available by the National Church were studied and used so that Trinity was ready to embrace the new Book of Common Prayer when it was finally adopted in 1979.  The interior of the church was remodeled to accommodate a free-standing altar, underscoring the fact that the Eucharist had become the focus of our worship and the laity was given back their significant role in worship.

The Reverend Frank Dunn was rector at Trinity from 1979 to 1992.  During his tenure Trinity’s membership grew and became known for strong lay ministry.  A Pastoral Care program was established to enable parishioners to help each other in times of crises as well as continuing strong outreach programs.  During the 1980’s, a two-manual 26-rank Austin organ was installed, youth choirs were organized and trained, and the parish library greatly expanded.

The Reverend Greg Carlson Bancroft served Trinity for a brief period in the mid-1990’s.  His tenure was sadly tainted with allegations of clergy misconduct with an adult resulting in the Bishop asking for his resignation.

The Reverend Kathleen Adams-Shepherd was called as rector following this difficult time and served from 1996 until 2016.  In 2000 the parish accomplished a successful 1.5-million-dollar capital campaign providing major renovations throughout the church and parish house. An Assistant to the Rector for Adult Education and Spiritual Formation was hired in 2003 in place of a Curate.  The vestry, in the fall of 2012, was in process of revisiting planning needs considering the downturn of the economy in 2008, slowing growth in the larger community, and the plateauing of membership.  However, the tragic shooting at Sandy Hook Elementary School occurred at this time, placing these plans on hold as Trinity redirected its ministry to respond to church and community needs for healing.  The vestry decided in 2014 to re-engage the issue of planning for the future and the year-long process completed in early 2016.  In recent years, members of Trinity helped to establish Ben’s Lighthouse, a grassroots organization founded following the tragedy at Sandy Hook Elementary School to honor 6-year old Benjamin Wheeler, a member of Trinity. The Newtown Interfaith Refugee Resettlement Program also had its initial start several years ago through Trinity.

Our current interim priest in charge is the Reverend Dr. Jenny Montgomery.  Bishop Ian Douglas appointed her, with a unanimous vote and affirmation of the vestry in January 2017.  During her tenure as priest in charge, Trinity has continued to engage with the goals of the visioning process and heal from the trauma of the Sandy Hook shooting.  The vestry has been reorganized to ground ministries in becoming apostles, following God into the neighborhood and making disciples, deepening our Christian faith. Guidelines for Mutuality are being used to engage in deeper conversations about Trinity’s past. Announcing her retirement for July 2020, the transition team is beginning their work to call the next rector of Trinity Church.

Trinity has been and continues to be a community of faith with open hearts, open minds and open hands; grounded in tradition, engaged in the present, investing in the future, becoming apostles, making disciples, following God into the neighborhood.  You are a stranger here only once.  It would be our great joy to welcome you among us.
Proudly powered by Weebly