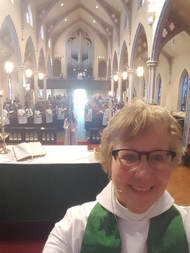 Before joining Trinity Church as our Priest - In - Charge in March 2017, Jenny served as the Rector of St. Andrew’s Episcopal Church in Arlington, Virginia for eight years. During her tenure many new members joined the church, particularly families with young children. Outreach to others increased significantly and several new partnerships were formed with community organizations. She was also involved in taking public stands for equality, racial reconciliation and social justice in Washington, DC.

Prior to St. Andrew’s, she was the rector of St. James Episcopal Church in Clinton, New York and Assistant Vicar at Christ Church Episcopal in Richmond, Virginia. She is an Associate of the Society of St. Margaret's located in Duxbury, MA. She has extensive training and experience in supervising seminarians and mentoring newly ordained clergy. Jenny received her masters and her doctorate of ministry degrees from Virginia Theological Seminary. Prior to ordination she was the Director of Volunteers and Patient Relations for INOVA Fair Oaks Hospital in Fairfax, Virginia. 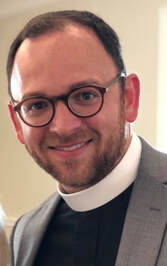 ​Matt was raised in central Louisiana, and graduated from Louisiana Tech University in 2007, achieving a BS in Agricultural Business. ​Following undergraduate studies, Matt's career prospects eventually moved him to North Carolina, where he was introduced to the Episcopal Church. What began as volunteer service in a food pantry, led to a rediscovery of the presence of God through the fruits of a community with a shared vision to live the Gospel.  While an active member of St. Paul’s Episcopal Church, Greenville, North Carolina, Matt served in several lay leadership positions.  He was elected to the vestry, eventually serving as chair of the financial management committee and as Junior Warden.  Serving alongside parishioners who continually sought to restore the dignity of God’s creation eventually led Matt to explore his own call to ordained ministry.
​
Matt looks back on a rewarding career in commodities trading, risk management, finance, and banking.  He moved to New Haven in 2016, to begin his seminary studies.  Matt graduated in 2019 from Yale Divinity School, achieving a Master of Divinity, and a Diploma in Anglican Studies from Berkeley Divinity School.  Matt was ordained a transitional deacon in the Diocese of East Carolina in June, 2019, and he was ordained a priest in December, 2019. 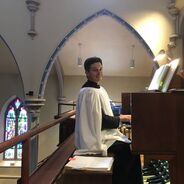 Don is a native of New Jersey and studied organ and voice at Kean University, New Jersey. He has been involved in liturgical music for many years, most recently serving the Parish of St. Anthony in Prospect, CT. He is an active member here at Trinity along with his wife Crystal and sons Michael and Myles. They reside in Sandy Hook.
At Trinity, we are so very fortunate to have a Director of Music Ministry with a deep passion for music. Any conversation with Don always turns back to his love of music.  For example:
Can you tell me about your childhood?
“I grew up around the corner from a church. I’ve been fascinated by church music since a young age. “
Can you tell me about your boys?
My oldest is in Sandy Hook School, and is a graduate of Trinity Day School.  It was great having him right down stairs, so convenient. He loves everything. He does like Trinity.  He does like the organ.  He does like music. Now Myles has started downstairs, and once again, I get to enjoy having him learn right downstairs!”
If you could choose any other career, what would it be?
(There was a pause while Don thought.) “I don’t think I can, this is the only thing I’ve ever known.”

Kim lives in Danbury with her husband and three teenagers.  With a background in Marketing and Public Relations, Kim is responsible for all communications, both internal and external, as well as maintaining our membership database.  Kim is honest, trustworthy and fun to work with.  Prior positions include Director of PR at Immanuel Lutheran Church & School, Communications Manager for Physician One Urgent Care and PR assistant at Ethan Allen Headquarters.

Lori and her husband Frank have been living in Newtown since 1993. They have two grown children.  Lori is a whiz at accounting, and we are blessed to have her knowledge and expertise here at Trinity.  When asked about her job, Lori said "I love working at Trinity.  I feel very welcomed here, and it's a friendly atmosphere. The parishioners are always so friendly and helpful ."  Lori is in the office on Wednesdays.  If you need to connect with her, the best way is email her to schedule an appointment.

Jack has been a pillar of Newtown for many many years.  As a prior police officer of the town, he is recognized by many who have fond memories of Jack being "a great, and fair cop that we all enjoyed seeing."  As an employee of Trinity for close to 20 years, Jack is an expert on all that goes on in our church building, and we are lucky to have him!
Proudly powered by Weebly